I’ve had my Nexus One for over a month now. Normally I would have blogged something about it by now, but for some reason I haven’t really had a need. Maybe it’s because it just works. I haven’t really had anything to complain about – yes, it took some getting used to not having to constantly tweak the Wi-Fi/3G connection (like I had to on my WinMo phone), but I’ve learned to leave it alone now.

I do want to talk a bit about some of the user experiences, different applications have given to me. I’ve a few hopes and suggestions that I would like to share with you.

Most of it is aimed at developers, but maybe some users might want to add their own comments to this.

I want to focus on here is different ways of using the Listview. Everybody seems to be adding their own little “value adds”. I like most of it and actually the point of this is that I want more. I’m mostly on about consistency – Android as a system is quite young, and best practices are still to settle down, but we already have some interesting options and some a bit less… desirable.

One of my favorite features of the Twitter client Seesmic is the refresh option when I get to the top of the list: 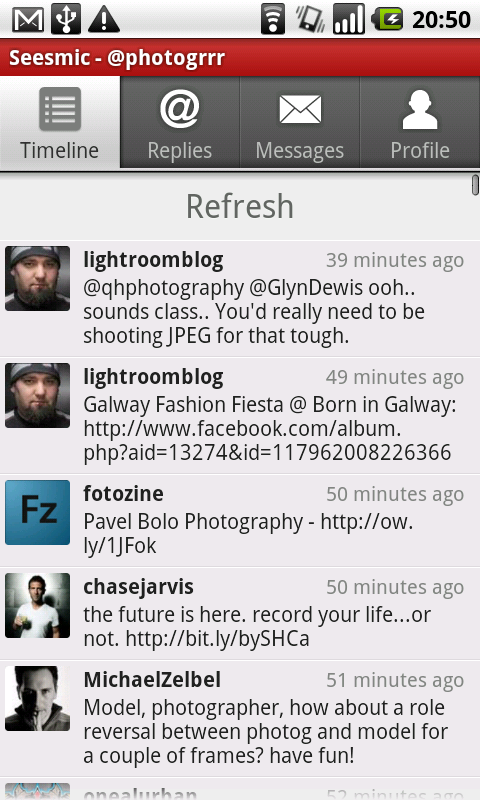 If I start by reading from where I left of, and read upwards (forward in time), I get to the “Refresh” options when I’ve read everything – exactly when I need it. Tab refresh and new tweets are added “up screen” and I can repeat the procedure. It’s not part of the list, so it’s only using space when I’m at the top. Like the URL field in the browser.

Next and Prev – NewsRob style

Okay, not really about the Listview, but still about how to move in a set of (Listview) items. When looking at a page in NewsRob, you can’t normally see them, but if you press center screen towards one of the edges, two small arrows appear, which will take you to the next or previous item. I use this a lot. 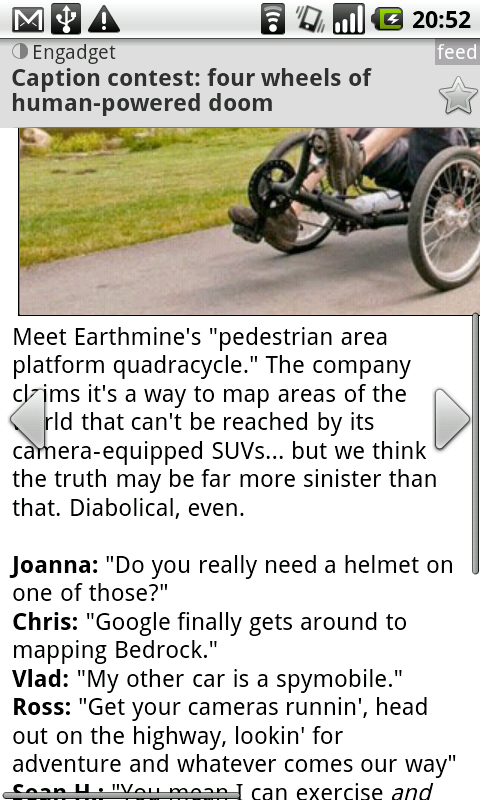 Applications where I miss this: Seesmic and more or less anything with a page view, of something based on a list. May seem a bit strange to want to read tweets in a full page view, but it would make it possible to do stuff like picture preview in-page (pre-loading thumbs from twitpic/yfrog/etc), or just use a larger font, which is nice for prolonged reading.

Some different things here, but the Contact listview is really nice.

The information: I like to be told that I’ve 325 contacts.

The Headers: The little ‘A’ about the contacts starting with A is nice. It helps.

The fast-scroll handle: Gives me an option to scroll really fast through the list. Nice. 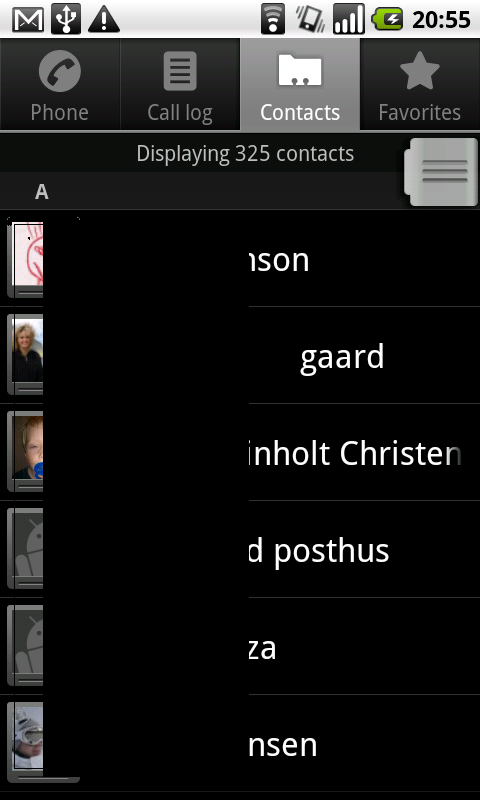 (Sorry about the crude box-out).

Applications where I miss this: All of them… in different ways. I would like a “1 hour ago” headline on groups of tweets in Seesmic, instead of that bit of text in all tweets (cleaner look). The item count is already visible in NewsRob feeds, but for some reason it’s above their new icon menu (which uses their own ugly strange look, instead of the standard).

A few things that I don’t like, just as an example of do-nots:

The WordPress applications is cool and does the job – most of the user interface is quite nice. But… 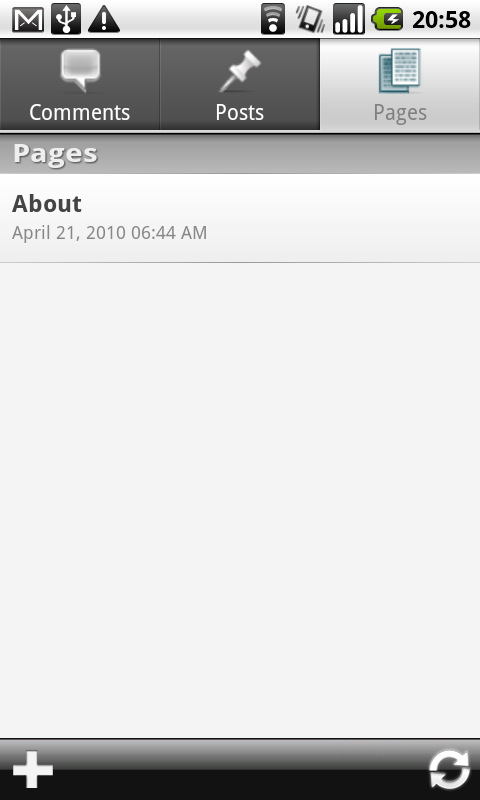 The Posts and Pages panels have an extra Title line that tells me where I am. The Comments page does not. I know it’s not needed because I can see what the current choice is in the menu. Bottom menu: “Refresh” could go into a Seesmic style Refresh area and the + (Add new) should go into a regular style menu (the one that pops up when I click the “hard” menu icon).

The Yammer app is really Spartan – that’s okay, but it could really use the Seesmic refresh button. And the lack of threaded conversations is kind of a downer. But the most annoying thing is that the only thing I can do with an item is tab it and get:

So, you will not give me the full screen to write in, but just a tiny area in the middle. But at the same time you blur the background so that I can’t see the text I’m replying to.

But then again – I can’t open up an item and do things like click on a link, or copy the text (something missing from to many Android apps), frustrating.

P.S.: Yammer for android hasn’t been working for the last few weeks. It gave me a blank screen on 2.1 and just crashes on 2.2 (Froyo). Reading the comments in the App Store it seems, everybody is having the same experiences.

There’s a lot of good stuff out there. Some interesting bits are being added to the core elements. There’s not much consistency, but I think it will all shake out to something not all too annoying.

The only things that are really annoying, are when developers ignore that there’s already a menu system or standard way to do something and decide to implement their own solution, and do it badly.

But then again – most android apps are probably the first android app, developed by that developer or team. I’m willing to forgive pretty much anything, for now.

What are you favorite Android User Experiences? And least favorite?