This is the first book, by Vinge that I’ve read and it couldn’t have started much worse than it did or end much better. aFud starts off with a family crash-landing their space ship on an uncharted planet, the parents get killed nearly right after planet fall and the kids have to survive in an alien and medieval society. Yuch! Sounds like the basis for a really bad young adult novel. 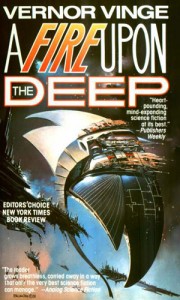 A Fire Upon the Deep

But the book quickly takes off in other directions with a couple of other subplots. Actually the story starts of with the story of why the family ends up crash-landing on a backward planet; using a receipt, masked as a plan for achieving transcendence, that they found in an old library, they have created a monster. Vinge has created a very interesting universe consisting of the Transcendence, the Beyond and the Slow-zone; the Slow-zone is space with the properties as the space that you and I live in at the moment (why? Oh. Why?). The Beyond is space where faster then light travel and higher machine intelligence is possible and the Transcendence is, well, an even higher plane.

As the story took off, I even started to enjoy the subplot about the kids – the aliens that they live among are so interesting and take over so much of the subplot that they could actually be the basis for a quite interesting story in and of themselves. Maybe not exactly a must-read, but if you like grand scale space adventures this is not one to miss.