I’ve waited a bit before I started on this review, in the hope that my feelings for this book would somehow clarify. But the truth is that I still don’t really know whether I like it or not. I’m not even sure that I can classify this book as science fiction (not that there’s anything wrong with that – but the blurb on the back cover calls it hard science fiction). 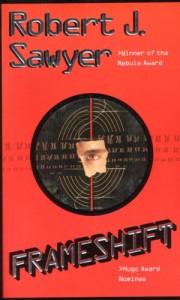 The title Frameshift is referring to an error that can happen during DNA replication (one DNA pair disappears or an extra is inserted, if I’ve understood it right). But Frameshift is not really about frameshift, it’s about Pierre Tardivels fight against a deadly disease, Pierres fight against a Nazi war criminal, an insurance company and a genetic experiment done against Pierre and his wife. And that’s probably one of my biggest problems with this book, it’s basically trying to tell two stories at the same time and even tries to create an illusion of these stories being even more stories. That might have worked, but the stories are so thin. The ideas are not bad, but Sawyer seems so intent on mixing political satire and critique in to the story, that the stories get shifted to the background. Maybe I would have found the political satire and critique relevant and fun if I had agreed some more with Sawyer. I got no ideas as to Sawyers political standpoints, but this book was just a bit to “tree hugging” to me.

Like I said, I don’t really know what to think about this book. Maybe I’m just not a good enough reviewer to tackle this book or maybe it’s just a good thing that I didn’t sign a contract saying that I would have a rock solid opinion on everything when I started reviewing…