I’ve heard this quite a few times in my twenty+ years in business. I’ve had different thought about it depending on time and place – but I think it’s safe to say that most of my thought weren’t that nice.

It’s mostly a question of missing context and having the wrong audience. Allow me to explain.

But first a somewhat related video – not directly related, just the one that made me remember these thoughts.

So imagine you are a software developer (or something else, but not a “sales guy”), sitting in a room that’s 50% developers, %30 sales guys and the rest is management. One of the C-Level managers is giving a status report – it’s not going to well. Sales are down.

He is saying stuff like “We need to sell more!” (without explaining how that’s going to happen) and “We need to focus on closing!” (like the sales guys didn’t know this). All the while the dev guys will be nodding, waiting, reciting Pi in their head and just try not to look bored. They have heard this before.

“Everybody needs to sell – you all need to sell.

You all have a responsibility for closing those deals!

You are all sales guys!”

<Bangs fist in table – points around the room>

Thank you everybody and goodbye.

Well, firstly notice how this card is never pulled, unless the company is in deep shit. It’s a desperate step, that is though to pull the company together – to put everybody in the same boat. We are all sales-guys. I’ve rarely seen this card pulled, without somebody or a bunch of somebodies being fired shortly after.

Secondly you just told the sales guys, that they suck so badly at their job, that a bunch of developers and administrators can probably save the day. Sell the stuff they didn’t manage to sell with their 10+ years of experience. Probably not that inspirational.

Quite a few developers are a liability in the sales process (not all). Yes, there should be lots of collaboration between sales (they are a customer of the product as much as anybody), and the development team, but taking a random developer to customer meeting is mostly a liability.

A developer will say things like “Yeah, that sounds easy, it will take a couple of days to develop” to the customer when the real answer is “The value to you will be  999 and I think you’ll be willing to pay 555, so we will need exactly 555 money to make it” (just packaged differently) – which is usually a lot more then what will be charged for two straight days of dev time. Also the first estimate of the dev will be low (he’s bragging – I know, because I’ve done this).

The developer will go back to his desk. Shake his head and forget it – if he’s lucky. He might feel a bit depressed, because he sees this, for the desperate move that it is. He sees the future. Okay, so lets say he thinks a bit more about this. 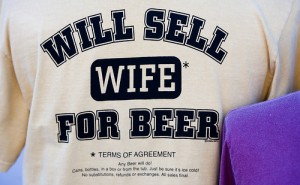 What does he know about sales? Well, the sales guys seems to be talking a lot with (potential) customers. They seem to call customers and “sell”. Sell might be stuff like explaining why the product kicks ass and why the customer needs it. More meetings and then it will sit in pipeline for a while and then disappear. Hm.

Where does the customer come from? Random dialing? Randomly browsing the yellowpages? Some sells guys seems, to sell the new product to all their old customers/friends, and then run out of steam. Does the dev know anybody interested in the product? What will his (dev-) friends think of him if he calls them and tries to sell them something? Will they ever talk to him again? Probably not. Probably better to call and ask them about any job openings, than alienate them…

The dev has only been in one real sales meeting before, which he though went pretty well, he even managed to respond with a quick estimate to a question from the customer, but his recollection of what really happened there are hazy. Did we “close” that deal? Was it good? Probably – didn’t a few weeks of development work came out of it?

So the developer spends the rest of the day twirling his office chair, staring into the air, waits for somebody to tell him what to do. The next day, he’ll be back to normal, with just a small nagging doubt that something bad looms in his near future.

Does it ever make sense?

Well, yes. If you make it clear what you mean by it.

But mostly it’s common sense – because it’s something, that you should be doing every day. Whatever it is you are developing, it is going to be sold. Somehow, somewhere, somebody is going to give you money because of that product. That’s “sold”.

Developers are sales guys only in the sense, that they make products that has to be sold. If they are really good (and the market is right) they make a product, that sells it self. You are in sales, because every time you spend resources on a feature or function, you remember that the time you spend on it, needs to be financed by a customer. Maybe not today, but one day.

Now you are selling.

(that takes brass balls – being a developer takes balls as well, but they don’t have to be brass)

p.s.: If you don’t know if a function has “sell” value, go ask for a “business case” (I’m really hoping you already have a “use case”). Ask you product manager, ask a sales guy, make one. Maybe collaborating with a sales guy, maybe having him add a real (potential) customer to the team. Go!

2 thoughts on “Stop saying that: Everybody is a sales guy”