I was really excited when I found CrashPlan – The idea of being able to backup to both a local server, a friends server and to the cloud with the same tool, sounded to good to be true.

Setting up and getting it working was fairly simple. I’ve a local server that I usually do my back to (a fairly simple xcopy command) and I run mozy on that server to move everything online. 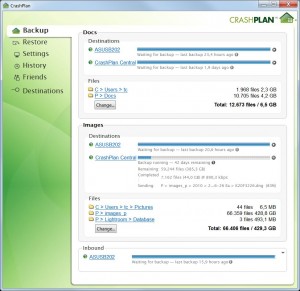 I installed the crashplan on both my laptop and my local server. The software registers the machines with crashplan, and as long as you login with the same user account, they know each other. It’s just a question of selecting your data and where you want it to go.

When you sign up you get a 30 days free unlimited trial account. So I set up my machine, to back up my documents folder and my photo archive to both my server and the CrashPlan server. This is a lot of data. My documents folder is 30Gb – my photos (raw files) are 400Gb. So I was prepared to leave my laptop on for a few days.

About the screenshot: I’ve set up two backup sets. Docs and Images – both are backing up to my local server (ASUSB202) and to the CrashPlan cloud. I also accept inbound backups of the documents on ASUSB202 – so my laptop works as a backup server to.. This is the Advanced view – there’s also a simpler view, for people who can do everything with one set.

After two days it was less then 10% done. I stopped it and moved the hard-drive from the server, to the laptop and did the backup directly to that. Took about 24hours. Moved the drive back in the server and mounted the archive in CrashPlan. Worked. Cool. Still slow – it took 24 hours to backup to a local drive.

Okay, restart everything and wait for the crashplan cloud to show it’s worth.

At first I was quite disappointed – my average speed to the CrashPlan cloud was 12KB/s (no, I’m not connected with a 28.8Kbps modem, I’ve 1.5Mbps up) – that’s going to take years to complete. Not a viable solution. I upped the network cache and changed the scheme to “Throughput” and got up to an average of 20KB/s (this also nearly tripled my local backup speed). Still not enough.

Opened an issue in CrashPlans issue tracker and.. nothing. Halfway through the 30 day trial, I complained on twitter.. and got a friendly response and request for my issue number. I provided it and something happened. My case was forwarded to somebody else and.. things got a bit faster. My current speed is around 80-100KB/s. I never got any more feedback in the issue tracker, but hey, if it works.

My theoretical top speed is around 200KB/s, so I think CrashPlan can do better – maybe some concurrent connections, would help them maximize the data throughput.

But I’m okay, with what I got – I’ll have everything seeded in a couple of months.

My 30 day trial ended today. So I had to make a decision.

Did I pay – oh, yeah. I got the full CrashPlan+ Family Deluxe All-You-Can-Eat four year plan.

CrashPlan has gotten a lot of attention lately – and they are swamped with new customers, so I’m willing to take a chance with them, even if things are less then perfect at the moment. They obviously try, and their technical platform and solution (even if a bit slow) is superior to the other solutions I’ve tried.

One thought on “CrashPlan local and online backup”