After the bad experience with Frameshift, I didn’t really want to starting on a new story by Sawyer. But, everybody deserves a second chance and when a friend ruthlessly dumped The Terminal Experiment (TTE) on me, I decided to give it a go. Bad decision! TTE is even more annoying and error ridden than Frameshift and makes for a fairly bad experience that nobody should have forced on them. I’m not sure why I even finished it. 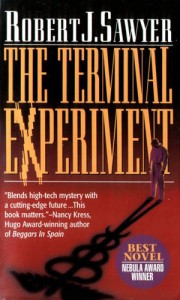 TTE starts of when the main character, Peter Hobson, detects that humans have something that could easily be described as a soul and that this soulwave (as he calls it) survives after our death. Peter decides to create three computer simulations of himself, to test how the disembodied soul changes (in other words: what’s the afterlife like).

And this is where the story falls apart. The first simulation is created without memory of physical experiences. This should simulate life after death. The second is created without knowledge of aging or death. This should simulate the life of an immortal. The third is left unmodified and left as an control. The life after death simulation, is invalid simply for the reason that, even with all these memories removed it would soon get new ones just from the interviews done with it (if interacting with the physical world isn’t a physical experience I don’t know what should be). The immortal one would soon gain knowledge of the fact that the computer it’s running on could easily be turned off, proving the mortality of the simulation in a rather fatal way. The control looses all similarity to Hobson the moment it gets disembodied by being run on the computer. Here’s lots more wrong with this scenario but, frankly, I don’t want to waste anymore time on this book than I have to.

Last but not least, Sawyer has in Hobson managed to create a character that is so incredibly civilized, nice and politically correct that it’s sickening. He doesn’t drink or smoke (nothing wrong with that, but then added to the rest…). And no matter what happens he reacts in a civilized fashion. And for sickeningly politically correct, just listen to this (from page twenty – Hobson enters a bar): “On his right was a poster for Molson’s Canadian depicting a curvy woman in a red bikini with maple leaves crowning each of her upturned breasts. Sexism in beer advertising, thought Peter: past, present, probably forever.” Really? I don’t think so – I’ve never heard of a (heterosexual) male who’s first thought upon seeing a pair of breasts is “Sexism!”. It may be the first thing that he says if he’s trying to score a few cheap point with a nearby female, but that’s another story.

Probably the last Sawyer I’ll ever read unless I get stuck with one of his books on a deserted island.